Our TOS allow records to be released to protect the public
by any griefer or misconduct towards our Grid.


Owner of Digiworldz Terry Ford has been up to his tricks again,
by disguising himself at Bonez Dawg avatar aka Butch Arnold aka HPotter aka Terry Ford.
We will not stand for these deliberate attacks any longer.
Since 2015 Terry Ford has been sabotaging GCG all the while being our go to guy for tech help.
He was our last tech guy when we were having issues.
Who used his cunning ability to pretend to be your friend while
deliberately destroying our grid behind the scenes.
And then ultimately Dec 27, 2019 deliberately shutting us down without warning.
And with no regards to any members of GCG.  It was illegal and unprofessional.

Now It's time to put a stop to Terry Ford.
After coming back with our new tech help and getting our grid going again.
Terry Ford deliberately attacked us behind the scenes once again.

This comes after the deliberate and once again false accusations and attacks on GCG
on Hypergrid Business...disguising himself as two seperate Avatars...while trying to deliberately discredit GCG.

For yrs I have been telling people he cannot be trusted...and that he was the reason we got shut down.
Maybe now that we have a creditable Tech guy to help us prove when things go wrong.

We can now show you what his latest adventures have been.
And who knows how long before we caught him and finally realized,
has he been doing this to other grids out there pretending to be your friend.
How many others has he done this to?
How long has he been playing these tactics?
This is no longer a GCG thing...this is a opensim community metaverse griefer alert.
Who has finally been caught.


This below is where it all started...all i wanted to do was state were back and better than ever with low prices again.

The below copy paste that shows an Avie HPotter aka Terry Ford had to go in world to copy paste a chat of his other alt under the alias Bonez Dawg
which shows clearly in the other pics below his email and domain clearly showing its owned by Terry Ford and that
his own personal email as well as it clearly shows on the next link below.
This is a conversation with him and other devs about xengines and the domain he owned back then and used as his primary emails.

This was also Recorded On Mon, Jun 1, 2015 at 10:06 AM, Where its Terry aka Butch Arnold...as BoneZ <bo...@dogzhouse.com <mailto:bo...@dogzhouse.com> > wrote: Hi Karl, I think since your xengine status results show you are only using 2 threads..
I'm not sure it would do you any good to increase max threads.
~Butch

Checkout the email and domain attached to this.
He even signed it as Butch!


This was posted but all of Bonez Dawg comments on Hypergrid Business were removed once he realized he could be traced.
Except what he forgot to do was erase HPotters alt post of his...with him actually going in to our grid AS Bonez Dawg lol.
Can you say OOPS! lol

HPotter to Roddie Macchi • 4 days ago I had a chat with some of the other users in your grid in the community chat about my missing items a few days before this.. and then I contacted you.I'll be happy to share a copy of the community chat to prove I was in your grid if you like.Now will you let us know if I was banned for asking you to restore my inventory, or if it was due to me telling you I wasn't interested in hearing about your last tech person? 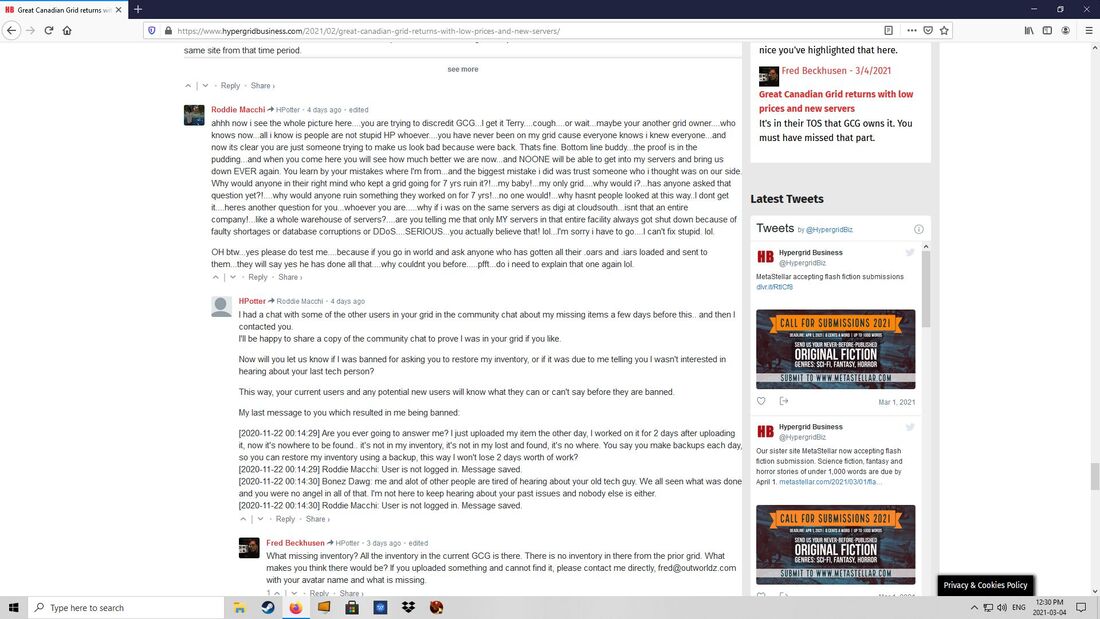 As you can see HPotter copy pasted his own chat in world as also Bonez Dawg...
and then he deleted all his comments on hypergrid business once he realized it but forgot this one above...way to goTerry lol
Below is the proof once again that all emails are associated and signed to the address of Terry Ford owner of Digiworldz

All three have three same emails coming from Terry Ford

This is the proof the day he deliberately started shutting down GCG by making up a lavish story
to give himself a reason to do it So that HE looked like the victim and the good guy.
Just wanted to throw this in since i found it.
Dec 27 2019 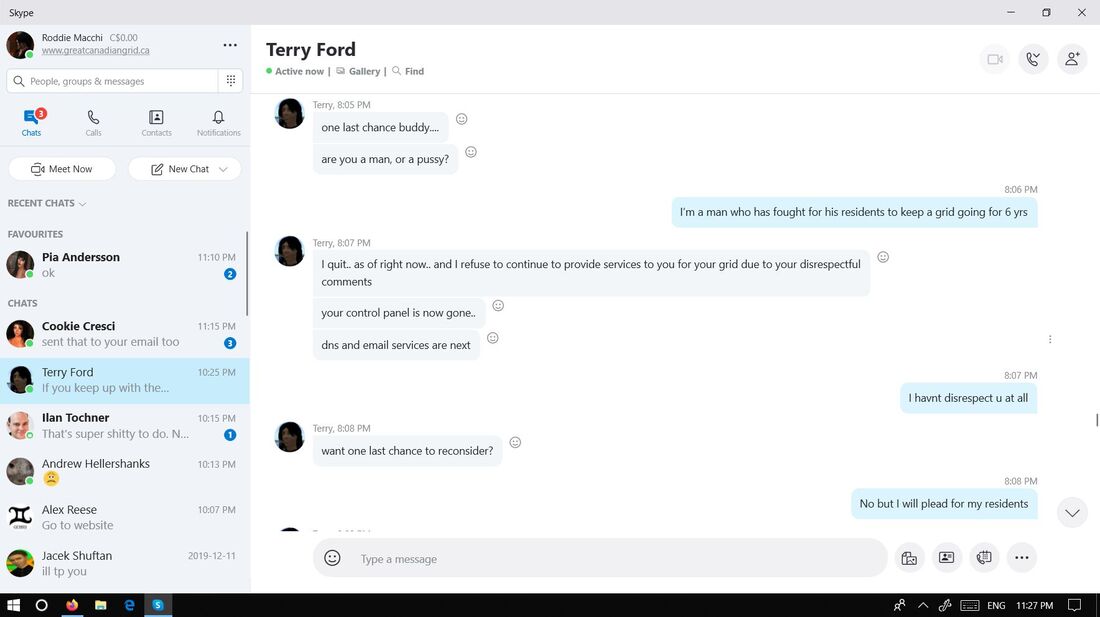 The image and many many times we went down in a course of 4 yrs that is all recorded and in my possession now.


I feel sorry for Terry Ford and the many who follow him believing that he's a good man...
knowing now for how he really is in real life,
I would feel ashamed to even support a man like that.
Because if he has the conscious to be able to do this to others for his own gain.
Imagine what else he does and who he does it to?


UPDATE! MARCH 4, 2021
Yesterday Terry Ford decided to BS again! and write a letter to all his followers on Disgus and HG Business.
Trying to do damage control and fool everyone again...anyways...
Guess what happened to all the proof i had on him?

It all got removed!! Check it out here.
https://disqus.com/by/disqus_PTpGCnpcde/
So needless to say...there's a MOLE somewhere in HGB...when you control the press and the people...well, you know.
But don't worry I recorded everything.... ;)
OH I almost forgot too!
Someone was able to catch a snapshot of good ol Bonez Dawg aka Terry Ford who came into the grid
and tried to load our server with millions of prims....and hey we all know what that does to a grid...it crashes it.
NICE TRY AGAIN TERRY!! 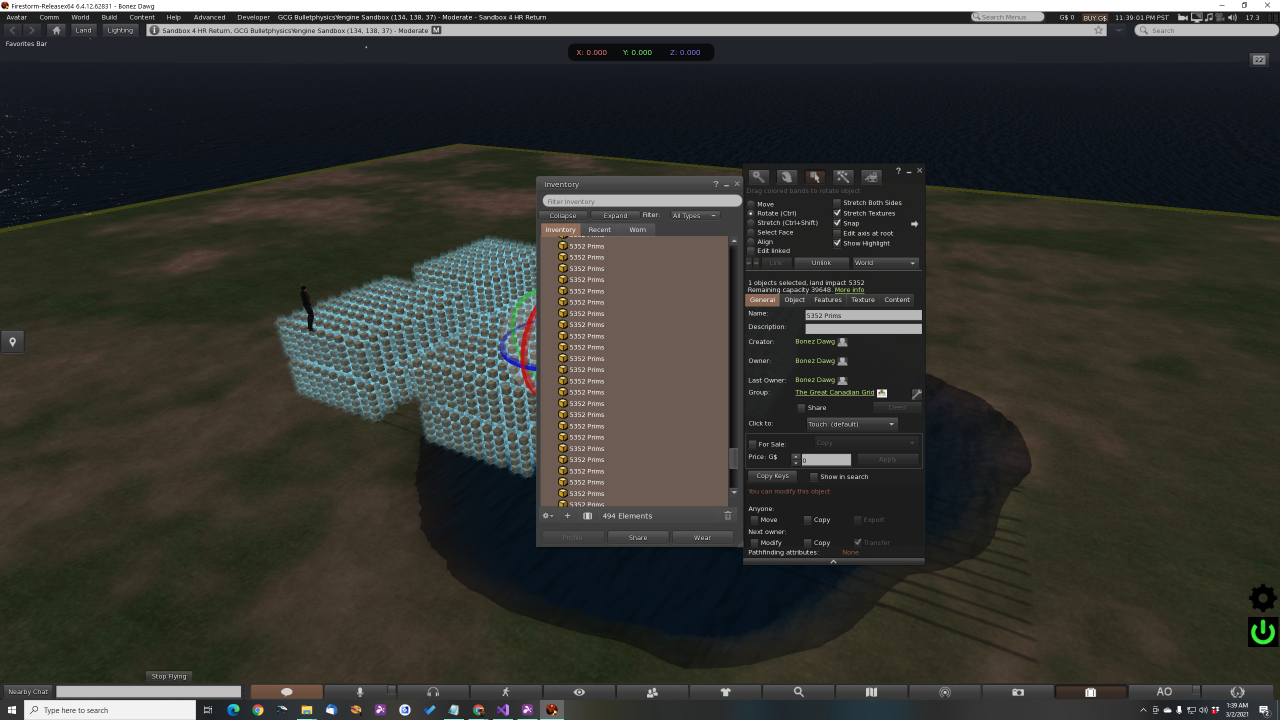 Comments have been shut off right after Terry got to say his speech, and I got banned lol..go figure..lol.
He has also tried to tell people that it isn't him...and that its a user on his grid
that he is making a grid for....which also isn't true if you look at when the domain was made and used.

This was also Recorded On Mon, Jun 1, 2015 at 10:06 AM, Where its Terry aka Butch Arnold...as BoneZ <bo...@dogzhouse.com <mailto:bo...@dogzhouse.com> > wrote: Hi Karl, I think since your xengine status results show you are only using 2 threads.. I'm not sure it would do you any good to increase max threads.
~Butch

Checkout the email and domain attached to this.
He even signed it as Butch!

And at this link:

which also points to it as Terrys own domain..you can have many domains.
But you don't make a domain for someone when you havn't even met him yet lol.
And also you don't use someone elses domain emails when talking to opensim about tech stuff.

LOL again...nice try Terry...lol....oh its someone else from my grid lmao.
That guy must have been psychic to know you were going to make him a grid
back in 2015! lmao.  And if you are going to sign your avatar name as Butch
why use dogzhouse.com as your return email lmao...thats a good one...omg people arent THAT stupid Terry!

All my proof has since been wiped off of Hypergrid business.

If this isn't showing how much pull Terry has in Hypergrid Business and the
dirty tactics he uses in opensim community for disquising himself to put doubt into others joining a grid,
constantly going to other grids and deliberately trying to crash their grid.
And all the while protraying that he's here to help his own grids...lol.....WELL...I'm sorry I can't fix stupid lol.

Needless to say...
Terry Ford owner of digiworldz is scared now...why?
Because we don't need him anymore and were on our own now,
and that's why he needs to do these stupid tactics.

But who else does he do this to?
This is no longer a GCG thing...this is an opensim community thing.

Be careful everyone in the opensim community...I tried telling you all.
Don't always believe what someone says...prove it.  And I just proved it.

Please...PLEASE be careful out there Grid owners.
This is no longer just a GCG thing...this is a vendictive money hungry
grid owner who goes around and protrays himself as an alt to try and do damage from
the inside of your grid.  This in all terms the worst that an avie can do,
even if this was someone else! we would want to stop such a griefer.
It is not my fault it all leads to Terry Ford owner of Digiworldz.
That's just us doing our homework .

And Hypergrid Business should be ashamed of allowing anyone to trashmouth
a grid without proving their innocence by removing everything.
HGB is no longer real news to me.  Its too one sided now.
The evidence is clear on that as well.


So there you have it...Well, I have a GREAT GRID to run now,
with great members that still believed in me knowing I was right,
Thank god most of my users knew I was right all along.
I just couldn't prove it. Well the proof is in the pudding now.

I have the best team ever and no more devil on the inside mechanics,
we can set out to do what we always wanted to be from here on in.